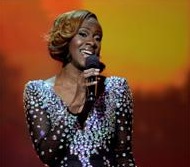 NEW YORK – April 1, 2014 –Since her win on the third season of BET’s Sunday Best, Le’Andria Johnson has made a name for herself as a powerhouse vocalist in gospel music.  Announced today, Johnson signs an exclusive recording agreement with RCA Inspiration. Under this deal, RCA Inspiration will exclusively distribute and provide marketing and promotional services for future albums by Johnson.

“God promises us a future greater than our past,” said Le’Andria Johnson. “I am so happy to have a new home with RCA Inspiration.  I look forward to working with the best team in the business to spread the gospel of Jesus Christ. I’m ready to use the hurt from my past to love people back to life.”

“I’ve been a fan of Le’Andria’s ever since her first performance on Sunday Best,” said Geo Bivins, General Manager of RCA Inspiration.  “Vocally, her gift is amazing.  We are all very excited to have her here at RCA Inspiration.”

“Le’Andria has a very unique gifting for bridging generations of gospel music lovers,” said Joseph Burney, A&R Vice President of RCA Inspiration.  “She brings incredible vocals and a passion for people to every stage. I look forward to supporting her essential ministry.”