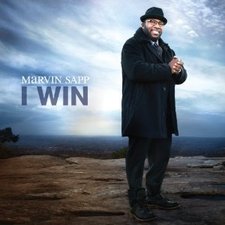 When you ask him about his different titles, Pastor Marvin Sapp will simply tell you that he’s a preacher first who just happens to sing. He’s given us the anthems that have shattered the airwaves, such as “Never Would Have Made It”, “The Best In Me”, and “He Has His Hands On You.” While he’s been encouraging millions around the world to “Keep Holding On” and to be  “Thirsty” for God’s presence, Pastor Marvin Sapp has had to endure one of the roughest seasons of his life.

It’s been nearly two years since Pastor Sapp lost his best friend who was not only his wife, but also his manager and when all of this transpired while he was at the top of his game, he continued to persevere and his witness to the world grew stronger. As he continued to tour, preach, and even serve as a resident judge on Verizon’s “How Sweet the Sound”, Marvin Sapp made the statement that brings us to this new moment in music, “I Win”.

Recorded live on October 7th, 2011 in Upper Marlboro, Maryland, “I Win” has been dubbed by some as one of the most anticipated albums of his career as many are interested to hear what he has to say after dealing with such a traumatic loss in his life. His answer to that comes in the current radio single, “My Testimony”.  Sapp teams up for the third time with Grammy award-winning producer Aaron Lindsey, and writes the song that tells the story.  The lyrics are a song of victory that simply say “ “ So Glad Made It, I Made It Through, In Spite of the storm rain, heartache and pain”. As the song goes on, you find yourself fighting tears as you not only think about what he’s overcome but also the journey that God has brought you through.

The album begins with the go-go infused “Teach My Hands To War” written by Aaron Lindsey.  Get ready to hear the cleanest backing vocals from Myron Butler and the veteran crew used on the last three projects since teaming up with Lindsey. Considering that the recording was done in the Washington DC area, the go-go infused song was a special treat.

Songwriters Brittney Wright and Joshua Lay lend Sapp their song, “I Win” which was already creating a buzz in gospel industry and is the title track to the album. Once you reach this song on the album, the spirit of victory hits your ears as the melodic background vocalist and perfect arrangements take you into the very presence of GOD.  I highly encourage you not to listen to this song while driving because it just might send you into praise on the highway!

Stan Jones (“Already Here” and “All I Need” by Brian Courtney Wilson) pens the upbeat “ I Belong To You”, while on “Never”, Romel Gibson and John Jackson bring a new flair to the album. While Juante Hall and Jonathan Dunn penned a powerful song entitled “Glory”, which admonishes God to release the weight and the sound of his glory. Prepare to be in need of an usher on “The Hymn Medley” as Pastor Sapp takes you down memory lane with some of gospel’s classic hymns.

“I Win” is a testimony to the victory and power of GOD. In my opinion this album is third installment to a great series and collection of music we’ve been given by Pastor Marvin Sapp.