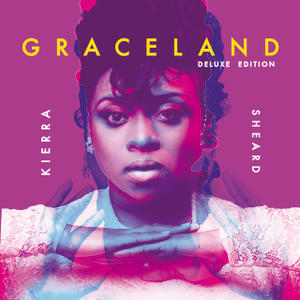 For a little over a decade, Kierra Sheard has consistently made music that catered directly to the younger generation, and she did so very successfully. Although her vocals are that of someone ten years her senior (that’s a compliment), due in part to the lineage of amazing singers in her family, she has become the voice of a generation.

On her latest effort “Graceland,” Kierra delivers probably her best and most complete body of work to date. After a huge debate on the hit BET docu-series, “The Sheards,”about what song should be the first single from her upcoming album, Super producer and songwriter Rodney Jerkins won the battle against Kierra’s brother J. Drew Sheard, with the song Trumpets Blow.  Although the song was hot, it did not connect at radio or with Kierra’s hardcore fans, as does the infectious Repin My God featuring Canton Jones. Although Jerkins won the battle, when it came down to the album “Graceland,” JDS won the war! JDS produced this album as if he had something to prove, and quite honestly he did. I have been saying for years that gospel artists are behind the eight ball as it pertains to sampling other vintage gospel songs. JDS must have received the memo because not only did he sample a regular gospel artist, he kept it in the family by sampling two Clark Sisters classics (Balm and You Don’t Like What You See), and with a new millennium flavor.

Kierra shows unbelievable growth on songs like Moving Forward, Save Me, In You and No Graceland, proving that she can saturate the CCM market just as easily as the Gospel market. One of the most surprising songs on the album was a song written by Grammy Award winner Diane Warren (Whitney Houston, Mariah Carey, Celine Dion), entitled Flaws. Flaws, a song likely more suitable for someone like Brandy, fit Kierra like a glove; as she beautifully belted out the lyrics, “Sometimes I talk a little too much to listen enough. Sometimes it’s way too easy for me to be myself but sometimes I hate the way that I look when I look in the mirror, one look from you I know, my flaws. You know you know my flaws, they make me beautiful….”

Kierra Sheard has managed to make the most complete and diverse body of work of her entire career, and she did so by staying true to herself, true to her fans and true to her brother, J. Drew Sheard. Graceland is indeed a classic.