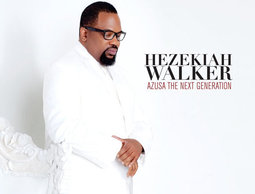 Album: Azusa The Next Generation

Not too many artists, gospel or mainstream, can attest that they have remained relevant since the 1980’s. There is one artist, however, who can confidently make that claim. His name is Hezekiah Xzavier Walker, Jr.

Walker’s last project, “Souled Out”, was a smash straight out the gate and garnered Walker his first #1 radio hit of the same name. It has been almost half a decade since it has been released and “Souled Out” can still be heard in choir stands and on “How Sweet The Sound” commercials across the nation.

On Walker’s 14th release, Azusa The Next Generation, he does not miss a beat, mastering a fusion of praise and worship, contemporary gospel and some good old fashioned choir music that Hezekiah Walker is known for. The album’s first single, “Every Praise”, is a totally different sound than “Souled Out”, but is equally effective in its delivery, and Walker’s distinct tenor takes the song to a place of divine worship.

Not one to have a plethora of guest appearances on one album, Walker decided to call in a few friends to make Azusa The Next Generation that much sweeter. Deitrick Haddon shines bright on “Break Every Chain”, as the song is more musical and intricate than the Tasha Cobbs version. Love Fellowship Crusade Choir alum and Kurt Carr singer, Timiney Figueroa- Caton, leads beautifully on “More Than A Conqueror”- a proclamation that states, “I am not a conqueror, Don’t call me a conqueror, Cause I’m more than a conqueror”. Grammy Award winner and label mate, Donnie McClurkin, leads strong on the timely “Breakthrough” in pure Donnie fashion, going from zero to sixty midway through the song, making “Breakthrough one of the high points of the project.

One of the better male voices to ascend upon the gospel music industry and United Tenor, Brian Courtney Wilson, represents to the fullest on “Grace” and showcases a vocal range that is simply amazing. The chorus boasts- “Your grace is my protection Lord I’m safe in your sight, When I’m wrong and need correction your grace makes me right, I’d be unrecognizable without your grace in my life, Lord I want more of your grace”. Wouldn’t we all agree?

Walker teams up again with the incomparable John P. Kee on “Work In Your Favor” and it is as much of a celebration as was their “I’ll Make It” collaboration more than a decade ago. Their lead vocals blend perfectly, as the Azusa Mass Choir modulates more than a few times, reminiscent of the Love Fellowship Crusade Choir’s early days.

Even with all of the star power, C. Ashley Brown still managed to make her presence known and voice felt on my personal favorite, “Amazing”, as did Su Su Bobien on “I Feel Your Spirit”, with a little help from the late, great Bishop Kenneth H. Moales Sr.

Produced by Grammy-award winner, Donald Lawrence and co-produced and co-written (70%) by Walker himself, Azusa The Next Generation is his most diverse work to date, and is reminiscent of Hezekiah Walker & LFCC’s, Live in New York By Any Means, when it comes to the synergy, vocals and song selection. If you are looking for that old school Love Fellowship “Bop Sound”, you will not find it on this project. However, what you will find is a more current and evolved sound that is consistent with today’s music; yet still offering listeners that classic Love Fellowship sound on songs like “I Feel Your Spirit”, “Lead Me To That Rock” and “No Greater Love”. In addition, the writing and production on this project is better than any of Walker’s previous works.

After over a dozen Grammy nominations and two Grammy wins, it’s hard to believe that Hezekiah Walker has never had any of his albums go #1. I predict that Azusa The Next Generation will in fact go #1, further solidifying Walker as the undisputed King of choir music!

Azusa The Next Generation has been ROOT CERTIFIED!

5. Lead Me To That Rock- Composer- Butch Heyward