His distinguished soulful voice is undeniably anointed. His songwriting is prolific and respects no boundaries to culture, age or denominations. Since his entry into the Gospel music industry with songwriting contributions to Fred Hammond’s Grammy Award-winning FREE TO WORSHIP album and his own chart-topping hits “Keep Me” and “Open The Heavens”, PATRICK DOPSON has become an eminent voice in Christian and Gospel music.
His new comforting and poignant worship single “GOD Is” has been making its way up the Gospel BDS Radio Charts and has entered the Top 15 songs. “GOD Is” is available on iTunes and the official lyric video can be viewed and shared on Youtube. Dopson is readying his forthcoming sophomore release GOD IS (fill in the blank) which will release on his Oilonit Music label and Central South Distribution.
Dopson recently performed at ASCAP’s ATL Live on the Park Gospel Brunch at Park Tavern in Atlanta, GA and has been commissioned to make several forthcoming high-profile appearances. He will be performing at the Morehouse School of Medicine Official Inauguration of their sixth president Valerie Montgomery Rice, MD on Thursday, September 11th in Atlanta, GA. Dr. Rice is the first woman to lead the free-standing medical institution who states, “My role is to continue to further the mission while positioning the school to remain relevant and at the forefront of an ever-changing medical education environment.” Dopson was hand-picked by Dr. Rice to sing his award-winning hit “Keep Me” with the Morehouse Glee Club and Spelman Glee Club.
With Dove Award nominations and a 2014 Stellar Gospel Music Award, Dopson is adding another accolade to his list of achievements. On Sunday, September 14th, Dopson will be honored with the Montgomery Gospel Praise Awards 2014 Lifetime Dream Award. This event will celebrate and honor the contribution and service of faith leaders and talent in the Montgomery, AL region. http://www.gospelpraiseawards.com
Dopson is also slated to appear in Lexington, KY at the COMEDY MANIA fundraising event on November 20 at the RUPP Arena. Comedy headliners include: Bill Engvall (Blue Collar Comedy Tour and Dancing With The Stars), and actor/comedian Sinbad (Jingle ALL The Way, Houseguest, A Different World). The event is created by University of Kentucky Head Coach John Calipari and The Calipari Foundation, Global Sports Aid Network and Samaritan’s Feet and will benefit each organizations efforts to impact and assist their community and the world by providing clean water, shoes for children and literacy programs. 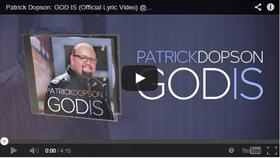