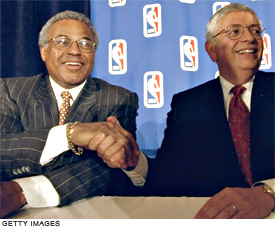 The NBA and the Players Association have reached a tentative agreement to end the five-month old lockout and start the league’s 2011-12 season on Dec. 25.

After 16 hours of negotiations Friday, the two sides reached a handshake agreement a little after 3 a.m. ET in New York. Both sides must still get a majority vote from the 29 owners and 450 players to finalize the agreement – as well as negotiate a series of smaller issues like a drug testing policy.

The owners made “significant moves” toward the players on several important system issues that long separated the two sides, a union source told Yahoo! Sports Saturday morning. “There’s still some tweaking to those that needs to be done,” the source said.

After the tentative agreement was announced, some players privately said they would not vote for the deal, believing they had conceded too much to the owners. Still, there is not believed to be enough support to block ratification.

“We’re optimistic that the [agreement] will hold and we’ll have ourselves an NBA season,” NBA commissioner David Stern said at a brief news conference held in New York with Players Association executive director Billy Hunter and president Derek Fisher(notes).

Free agency and training camps will start on Dec. 9, Stern said. Under the current agreement, the regular season would have a 66-game schedule that begins on Christmas Day with three games: Boston Celtics at the New York Knicks; Miami Heat at the Dallas Mavericks; and Chicago Bulls at the Los Angeles Lakers.

After disbanding as a union and filing an antitrust suit against the NBA, the Players Association needs to reform as a union and hold a vote to ratify the deal. The terms of the agreement included a 50-50 revenue split between the owners and players, a source said.

“We thought it was in both of our interest to try to reach a resolution and save the game and to be able to provide the mind of superb entertainment the NBA historically has provided,” Hunter said.

The players were feeling out how much leverage their antitrust lawsuits gave them, sources said, but it’s long been clear that Stern didn’t have ownership support to go beyond 50 percent. The players had a 57 percent share of the revenue split in the last collective bargaining agreement, and the move to 50-50 could shift as much as $3 billion to the owners over the course of a 10-year agreement.

“I speak for everyone when we say, ‘If we work, we’re excited,” Lakers forward Matt Barnes said. “I thought we’d eventually come to something. The league is doing too well to dismiss the season. I thought we’d get started in January or February.”

The settlement talks between the two sides began Tuesday and intensified Friday. Fisher flew to New York to join the negotiations that also included Silver, Holt and lawyers for both sides.

“It was a roller-coaster ride,” Golden State Warriors guard Stephen Curry said. “I followed every negotiating session and got my hopes up many times.”

The two sides thought they had previously been within reach of a deal a month ago only to have talks break down. After Stern threatened the players with a “reset” offer that would have included a 53 percent share of revenue for the owners, the players decided to disband their union on Nov. 14.

“The reason for the settlement was we’ve got fans, we’ve got players who would like to play and we’ve got others who are dependent on us,” Stern said. “And it’s always been our goal to reach a deal that was fair to both sides and get us playing as soon as possible, but that took a little time.”

CBSSports.com first reported the end of the lockout.