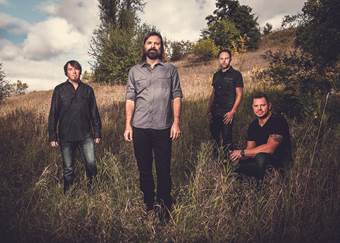 Nashville, Tenn. —THIRD DAY, for the first time in more than a decade, will release a new worship album, titled LEAD US BACK, slated for March 3, 2015.  The GRAMMY©, American Music Awards and Dove Award winning band, that has had 12 career albums to date, will also perform live on the day of the album release, at the famed Beacon Theatre in New York.  The highly anticipated LEAD US BACK album is the third worship recording that the multi-Platinum rock band will have released since the group made their mark on the music industry in 1996 with their self-titled debut smash on Reunion Records, which was certified Gold by the RIAA.  It will also include a deluxe version, with an additional disc of 10 fan favorites from THIRD DAY, captured LIVE ON THE ROAD from their previous sold-out tour performances.

Says vocalist Mac Powell, “We’ve wanted to do a worship album for quite a while but have been waiting for the right time. NOW is that time! I believe this is the best batch of songs that we have ever recorded!” Bass player Tai Anderson adds, “’Lead Us Back’ is a call to worship not just for our audience but the band as well. Why now? We’re ready for these songs. We’re ready to feel God’s spirit fall afresh on all of us again.”

The group’s previous worship albums, OFFERINGS – A Worship Album in 2000 and OFFERINGS II – ALL I HAVE TO GIVE in 2003, have been the two biggest selling albums of the band’s career to date. “I think the essence of THIRD DAY music,” says drummer David Carr, “has always had a thread of worship to it, whether we’ve classified an album as worship or not. Though we are confident in the direction we took on previous albums, we felt it was time for us to revisit the emotion and heart that comes through when the songs are unabashedly directed to God.”

Long known as Christian music’s premier live band, the Atlanta-based THIRD DAY has performed for audiences reaching into the millions all around the world.  The group has been featured on “The Tonight Show,” “The Late Late Show with Craig Ferguson,” “60 Minutes,” ABC’s “Nightline,” and written about in USA Today, the New York Times and Billboard magazine – a cover story which called THIRD DAY “one of the best rock bands, period.”

Tickets for the March 3 Beacon Theatre performance go on sale November 21.  The band will also embark on a 2015 worldwide tour in support of LEAD US BACK – dates to be announced.