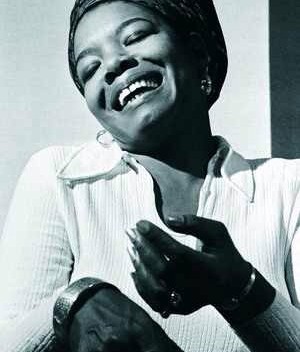 “Her life story rang a bell with me,” music producer Shawn Rivera told Billboard Magazine. “I wanted to bring her message musically to her fans as well as a new generation.” Co-produced by Rivera (lead singer of Az Yet, the R&B vocal pop group formerly on La Face/Arista Records) and RoccStarr (Jennifer Lopez, Jennifer Hudson, CeeLo Green), in both Los Angeles and Angelou’s home, the album features the poet singing and rapping her lyrics, and includes previously recorded and new live vocals.

In a rare interview before her passing, Angelou discussed the album and its impact, saying, “This project is important. It’s woven into the tapestry of our lives, and we’re being serious and giving and kind about it.” Watch the clip from AOL.com HERE.

Though best known for her poetry, Maya Angelou lived a long life full of music that included her critically acclaimed calypso album, Miss Calypso, seven songs with Ashford & Simpson on their album Been Found and collaborations with other musical greats including Wynton Marsalis and Roberta Flack. She was also the recipient of three GRAMMY Awards for her spoken word recordings, TONY Award and Pulitzer Prize nominations, as well as numerous other honors including an EMMY Nomination for Best Supporting Actress for her role in Roots.

“Music was such a huge part of my grandmother’s life,” said Colin A. Johnson, Dr. Angelou’s grandson and founder of Caged Bird Legacy. “She loved everything, from pop to country and, of course, hip hop. With her dedication to social activism and how she illuminated the struggles and injustices of the urban experience through prose, there’s a direct correlation to hip hop today. She was really excited about her words being presented in this way and I’m glad her fans will now be able to hear it.”

The album was recently featured on NPR’s Morning Edition, and Yahoo Music referred to Caged Bird Songs as “one of this fall’s most interesting and inspired releases.” PopMatters raves “you’d be hard-pressed to find a more creative way to celebrate the legacy of Maya Angelou than to put some slap bass behind her evocative spoken word poetry,” and Rolling Stone highlights Maya’s words as having a “tight, hip-hop cadence,” while also mentioning the stylistic diversity of the album – “backing tracks bring in elements of funk, boom-bap, and even surf rock.”

David Helfant and Smooch Music principals Larry and Van Kantor executive produced the project. Caged Bird Songs is available in two versions: the 13-track standard edition and an 18-track deluxe edition, and is available on iTunes and Amazon, with a deluxe version available exclusively at Amazon. For more information on Caged Bird Songs, visit www.cagedbirdsongs.com.