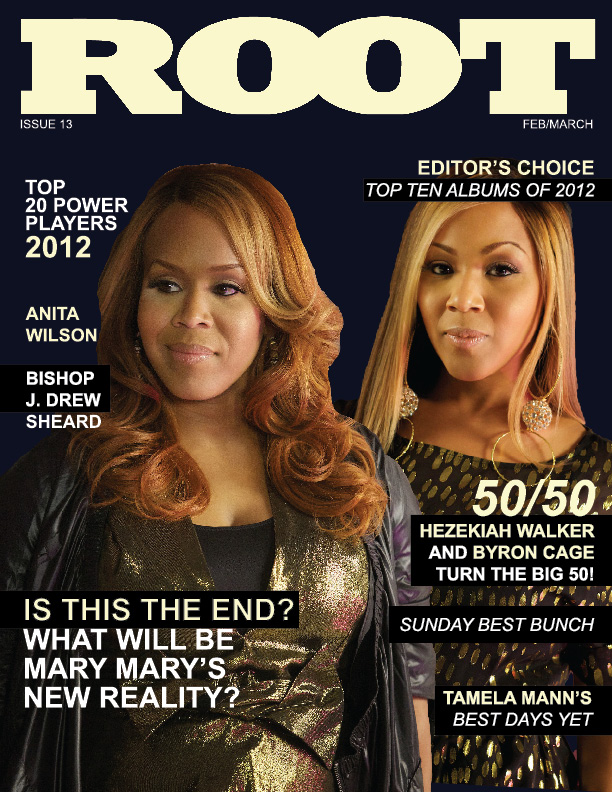 Issue #13 of Root will be released during Stellar Award weekend in a just a few days. Reality stars, Grammy Award winners and platinum-selling recording artists, Mary Mary, will grace the cover of this special edition.

WeTV reality stars and gospel singing sensations, Mary Mary, open up about the price of fame, being called “Gospel Artists”, their relationship with their father and going solo in an EXCLUSIVE interview with Root. Other features include Kurt Carr, as he talks about being in the business for over two decades, coming into the music scene under the tutelage of Rev. James Cleveland and his upcoming project, “Bless This House.” Rising gospel star,Grammy and Stellar nominee, Anita Wilson, also sat down with Root contributor, Thomas Warren, and discussed her classic debut, “Worship Soul”, and her place in the gospel music scene.

Two of Gospel’s leading men- Hezekiah Walker and Byron Cage, both turned the BIG 50 last December and celebrated in grand fashion on the east coast. Root Magazine was on deck to celebrate and has EXCLUSIVE photos to prove! Check out the photos in a special feature entitled 50/50. BET’s Sunday Best franchise has produced some of the best singers and artists in recent years and continues to raise the bar when it comes to anointed talent. Root caught up with 12 past contestants of the show in a rare interview entitled “Sunday Best Bunch” with a special foreword by Sunday Best Associate Producer, Neily Dickerson.

An online edition of this magazine will be available on Saturday, January 19, 2013. If you would like to order a physical copy of this edition, please send an e-mail to: TheRootMag@Yahoo.com. You can pay via Pay Pal and the price will be $5.00 plus $3.00 shipping and handling= $8.00 USD