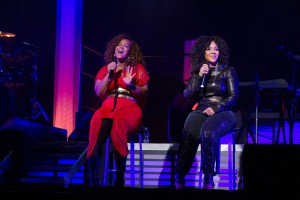 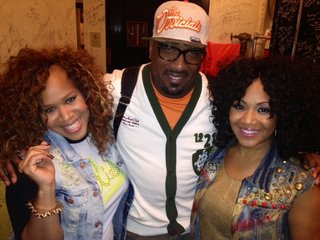 It’s not everyday that gospel artists sell out arenas and theaters to a mass of people, but three time Grammy award winning, platinum recording duo- Mary Mary, can now add SOLD OUT headliners to their laundry list of accomplishments.

Jessica sang her hit songs “Something Out of Nothing” and “Put It On The Altar” to an audience of 5,000 at St. Louis’ famed Fox Theater. Isaac Carree showed and proved exactly why he has been in the industry for so long, as he had the crowd on their feet from start to finish. “Shout It Out”, “Simply Redeemed” and his #1 Billboard smash hit, “In The Middle” was a perfect segue to the main event.

Before Mary Mary hit the stage, the screen above showed a skit of the Erica, Tina, sister Goo- Goo and manager, Mitchell, having a meeting. Mitchell, elated at the fact that none of the girls were pregnant, was anxious to finally get back to work uninterrupted. Then out of nowhere, the husbands walk in and start kissing their wives and while they are having the meeting, the ladies feel their stomachs grow and they both become pregnant within seconds! It was a hilarious skit and proved two things- Mary Mary are two down to earth working mothers who don’t take themselves too seriously and that they are now reality stars who could very well have a career in acting.

Clad in black and red ensembles, Erica and Tina began their set with with the infectious hit, “Get Up” from their 2005 gold-selling album “The Sound”. From there, the energy was high and they went into hit after hit after hit. “Heaven”, “Go Get It”, “Walking” and many others. Half way through the set, you begin to realize that for the past 12 years these young ladies have blessed us with so much great music and it makes you feel like you have not only grown up with them, but include many of the songs in the soundtrack to your life.

Erica and Tina undoubtedly presented an amazing show, complete with high quality set, occasional dance moves and best of all unmatched vocal ability. They continue to raise the bar in a genre that is not very easy to succeed in and prove time and time again why they are necessary to the music industry…..period!

It is shocking that after 12 years and millions of records sold, Mary Mary have finally embarked on their first tour as headliners, considering their extensive catalog. However, as the old saying goes, good things come to those who Wait, “Get Up” and “Go Get It!”