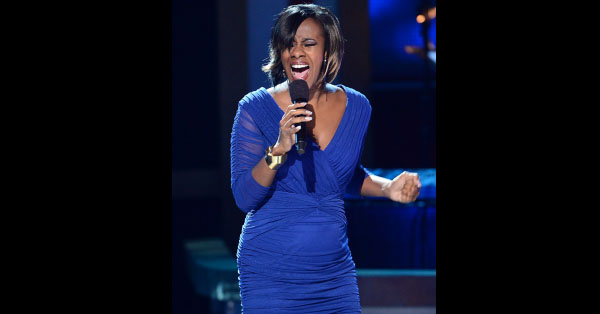 Root Magazine broke the story in early April that Le’Andria confirmed her pregnancy to crowd of hundreds at a make-up show in Philadelphia, presented by Out On A Limb Productions. Since then, our website has been flooded with hundreds of comments from promoters and detractors of the Grammy Award winning singer. We wish Le’Andria and her new bundle of joy well.

29 year-old Le’Andria Johnson has had a whirlwind year. Her debut album sold over 200,000 copies and she took home both the GRAMMY® for Best Gospel/Contemporary Christian Performance of her hit song “Jesus” and the Best Female Gospel Artist Award for the Digital Gospel Music Awards. Johnson worked throughout her pregnancy recording her live DVD and music video along with several concert performances. The singer plans to spend a few weeks with her newborn and will then gear up for active promotion and touring for her album due in stores September 18th –Le’Andria Johnson: The Experience.

Johnson has been under a significant degree of scrutiny during this pregnancy due to her marital status. However the twice divorced single mother continued to stick with her music and her calling while working through her personal difficulties. As a result, Johnson is back and ready to minister to all, having lived through her fair share of less than ideal circumstances – the singer is ready to encourage others who may have been in her shoes and spread a message of hope, love and reconciliation in Christ to all. Perhaps her current singles “Complicated,” “If Jesus Can’t Fix It” and “My Story Continues” best sum up Le’Andria Johnson’s outlook for the future. Johnson is ready to get back in front of audiences to spread her gift of song. Her album Le’Andria Johnson: The Experience is available in a standard and deluxe edition. It is currently available for pre-order on iTunes and Amazon. Amidst the busyness of her career, Johnson will pause from it all for some well-deserved family time with her newborn.