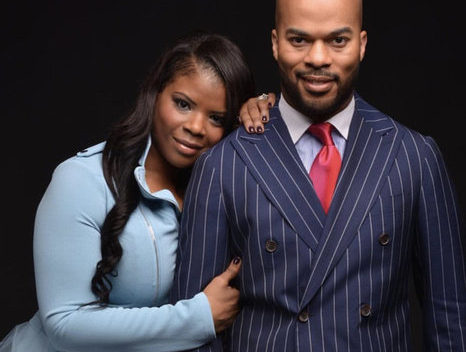 Last week a mother captured a video of her newborn baby lifting her hands in praise, to which the mom began singing the JJ Hairston hit, You Deserve It.

The video has since gone viral with upwards of 8 million views, and although the baby, whose name is Ariah Danae is still in ICU, her early praise is a clear indication that she will be out soon- happy and healthy. “The doctor said it was miraculous what my baby did and for the doctor to use that word, says something,” says Ariah’s mom, Cristin.

Multiple Stellar Award and Grammy® nominated artist, JJ Hairston and has wife Trina saw the video and invited parents, Cristin and Cory Ware, to be interviewed on FB Live and the couple obliged. What they didn’t expect was a star studded surprise Zoom baby shower, as JJ and Trina invited some of their famous friends, who also wanted to be a blessing to the Ware’s in word and in deed.

JJ and Trina spoke about their son being born at just three pounds, while Travis Greene and his wife gave their testimony about the challenges they too faced with the birth of their first son, which spawned the song “Made a Way.” Grammy® winner Tina Campbell, also talked about the hardships she and husband Teddy faced with the birth of all of their children and how at times she felt like a failure as a mother.

However, even in the midst of all of the testimonies, it was somewhat of a Gospel Family Reunion, as all of the artists laughed and joked with one another throughout the Zoom call which was broadcast LIVE on Facebook.

It was such an emotional display of love given by some of today’s biggest and brightest gospel artists and they all put their money where their mouth was, collectively donating thousands of dollars for medical expenses among other things during this pandemic.

John P. Kee even agreed to adopting the family for a month, providing money, resources and other things they may need through a program at his North Carolina church.

If you would like to be a blessing to The Ware family, you can donate via Cashapp: $CristinDanae