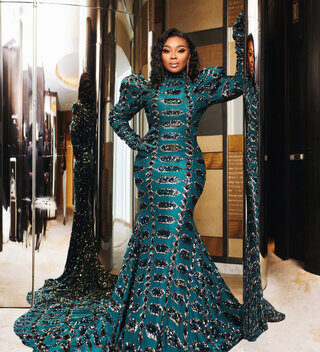 Las Vegas, NV – April 4, 2022 – Fashion always plays a leading role during “Music’s Biggest Night,” as the creative expressions of artists from every genre are front and center on the red carpet.

This year, Jekalyn Carr was a standout head turner, and she is making the rounds in the press for the show-stopping red carpet look that she chose, in collaboration with stylist J Bolin.

See what everyone’s talking about!

Jekalyn Carr was nominated in the Best Gospel Album category; it was her fifth nomination. Additionally, the singer recently launched Jekalyn Beauty Skincare and Jekalyn Beauty Haircare, offering a suite of products to simplify the needs of women of all ages. Products can be purchased at www.JEKALYNBEAUTY.com.

Jekalyn Carr is a featured performer on the third annual Stellar Music of Hope Easter Special airing in syndication later this month.

About Jekalyn Carr: Jekalyn Carr began singing and ministering professionally when she was only 15 years old. Less than a decade later, she is one of the top-selling independent recording artists in Gospel music, with nine Billboard No.1’s – including five No.1 radio singles, two No.1 albums and two No.1 digital singles. In her career, she has had seven Top-10 songs, five GRAMMY® Award nominations, two Billboard Music Award nominations, with millions of lifetime global streams on YouTube, and other platforms. Carr is the recipient of five Stellar Gospel Music Awards and two Dove Awards. In 2021 she was inducted into the Women’s Songwriters Hall of Fame. She was named one of EBONY Magazine’s ‘Power 100’ as one of the Most Influential People in the World and ranked No. 23 on Billboard’s Top Gospel Artist of the 2010s according to the All Decade-end Charts. Carr is also a speaker, author, entrepreneur and radio show host.