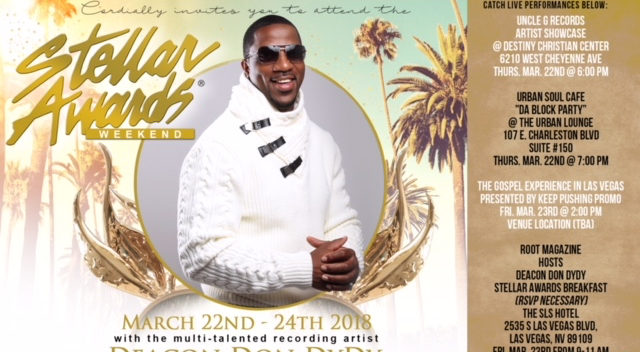 It’s ironic that 21 years ago today, one of the greatest rappers alive The Notorious B.I.G. or Biggie, as he is affectionately called by most, was gunned down in Los Angeles. The world of Hip Hop would never be the same and another innocent life was gone for nothing.

Deacon Don Dy-Dy knows all too well about the effects of senseless crime and tragedy, as his son, Dy-Shawn, was murdered on the gritty streets of East Orange, New Jersey last spring.

But the Deacon did not let that stop him from praising God and getting his message across in his music, and became an advocate for change almost overnight.

Here is the story of Deacon Don Dy-Dy

Once a repeat offender of the law turned spiritually enlightened emcee, Deacon Don Dy-Dy is an exception to the rule in terms of being an example of the potential parallel one’s life can take after a wakeup call. Living life being locked in a cell for years at a time, which for civilians often move at a rapid speed – but for those in the prison system slowly creep by the millisecond.  Dy-Dy grew up in East Orange, New Jersey with natural athletic talents that were certain to provide a segue to a college education and promising professional athletic career in the NFL.

“I went left around my sophomore year. I was a second string varsity as a sophomore and as a result of me playing first string against one of the number one three-year undefeated teams in the nation. They put me on to tie or win that extremely tight game and I ended up scoring a number of touchdowns. After that, Notre Dame recruiters had their eye on me and came to a lot of my games thereafter. I was only a sophomore! The following year, all I had to do was play but by that time, I was hustling, selling drugs and in the streets and decided not to play sports. A lot of my peers were also selling drugs and had the cars and the girls and I wanted to do the same, for the look of it. Meanwhile I was hiding from my coaches because I was deep into the streets and getting in trouble. It was a horrible decision. I was only five credits shy from being able to graduate.”
Shortly after Da Don made the choice to live the fast life, he was quickly kicked out of school and expelled from others. After a number of stints in prison due to drug trafficking and weapons charges, the now reformed gospel rapper eventually served a total of fifteen years in prison on a numerous charges.
Upon his release, Deacon Don was determined to set an upstanding example for his wife and children. So much so, he sought custody of his then twelve-year-old son, Dy-Shawn Simpkins Jr, in order to provide a more stable environment in which he could be a daily male figure and guide him through his matriculation through high school and college. Having inherited his father natural athletic talents, Simpkins Jr. was a starting as a ture freshman lockdown corner back at Norfolk State University. His future was bright. On June 9th of 2017, during his first summer vacation from college in New Jersey, a random and senseless act of gun violence cut Dy-Shawn Simpkins Jr.’s life short in a double homicide. There was only one survivor. He was 18-years-old.
“It was a wrong place at the wrong time situation. He was an awesome kid. He was my mini-me! He had an edge of ruggedness but I kept him out of trouble for the most part. And when he told me he wanted to go pro, I made sure he went to a catholic prep school with a notable sports program. He had a four-year scholarship by the time he graduated. He was a starting freshman, sky was the limit for him and that’s what hurts so much. He had so much potential to be successful, he would light up the room with his natural charm and he was a looker. And you know, I was honest with my son, I was honest with everything I did so he wouldn’t have to do those things, so he very well knew my history. But, like I said, it was a wrong place, wrong time situation that took him from us.”
After Simpkins Sr. was granted full custody of his son he is proud to speak about the monumental strides throughout their time together and being able to grow a father/son relationship – which revealed a shared passion – music. Having grown up in the city from which the original platform for hip-hop was birthed, Dy-Dy was a student of emcees of an era of a musical art form that no longer exists, yet, decades after its inception, the pioneers of the b-boy era are still celebrated without question.  Saddled between the original lyrical hip-hop vets and the “mood music” artists who no longer create classics but mass produce catchy hits, Deacon Don and his son Dy-Shawn also known SG (So Good) DaDa or Therealdada were able to bridge the gap between social media and old and new school poetry on wax.
In early 2016, Don Dy-Dy and his athlete/rap artist son Dy-Shawn were able to collaborate their talents and record a studio track titled “Seeds in the Field.” Don Dy-Dy and his collegiate football athlete student who, unbeknownst to him, was in the process of building a library of musical content.
As the Simpkins family continue to pick up the pieces after suffering the loss of 19 year old Dy-Shawn, The Don Deacon has made it his mission to spread the word of God through the use of his street oriented Christian hip-hop lyrical content bringing light and awareness to the senseless gun violence that plagues the streets of a number of inner cities across the nation. While many would struggle to find the blessing or silver lining in any tragedy, in sharing his music and experience, Don Dy-Dy has now dedicated his life’s mission to changing the lives of misguided youth before it’s too late.
Come and Meet Deacon Don Dy-Dy at this year’s Stellar Awards weekend: 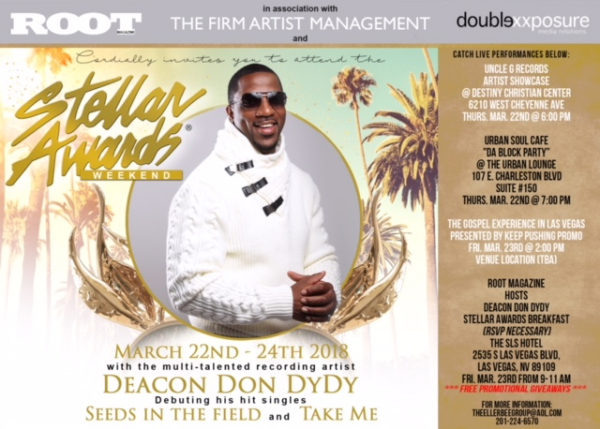 Shelby 5 Due to Explode on New Years Eve with BOOM!