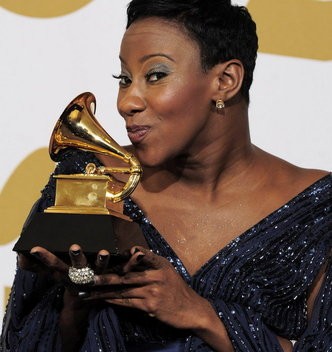 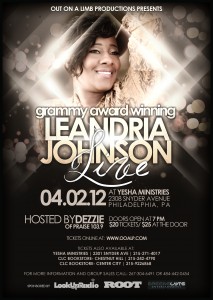 Grammy Award Winner Le’Andria Johnson will be coming to the city of brotherly love on Monday, April 2, 2012. Out On A  Limb Productions will be featuring the power house singer in a make-up date that was supposed to take place in mid December 2011 but due to the untimely death of her grandmother, she was unable to fulfill her commitment.

This appearance marks the first time Le’Andria will be in Philadelphia since her Grammy win back in February and the event is highly anticipated. Debuting three albums in six months (a feat unheard of in both secular and gospel music), Le’Andria has kept quite busy, traveling all over the country doing concerts and award shows. The girl from Orlando, Florida with a heart wrenching testimony and has no qualms with being transparent, is one of the best singers to enter the gospel music industry since Vanessa Bell and is sure to be a legend in her own right in years to come.

Will you be attending?

The Awakening of Le’Andria Johnson Deluxe Edition also features her GRAMMY award-winning single, “Jesus,” co-written by Le’Andria. An urban contemporary song, with traditional gospel roots, it offers Le’Andria’s soulful and stirring testimony about the difference Jesus has made in her life, and her impassioned plea to the listener to turn to Jesus and “call Him like you want Him, call Him like you need him.” Other songs on the CD include “Cast the First Stone,” a mid-tempo song with a memorable, contemporary tune and a powerfully delivered message about how wrong it is to pass judgment on each other, also co-written by Le’Andria; “Make Him Like You,” an R&B-style petition to God to lead her toward the true love that He designed for her; “New Reason,” a new millennium twist on 1960s soul, with a message about turning from bad relationships to a new and better relationship with God; and “Struggle Not,” co-written by Le’Andria and her brother, Terrance Johnson, a spiritually uplifting and compellingly worship song about God’s blessings in our lives. The Awakening of Le’Andria Johnson Deluxe Edition also includes two tracks with medleys of songs performed by Le’Andria on Sunday Best. The first medley combines her roof-raising rendition of Quincy Jones’ and Andraé Crouch’s “God Is Trying to Tell You Something,” from the Broadway musical, The Color Purple, and her fresh take on Fred Hammond’s (Commissioned) hit song, “Running Back to You.” In the second medley, Le’Andria puts her spin on Myron Butler and Levi’s pop-style hit, “Set Me Free,” and offers a heartfelt rendition of “I Shall Leap into My Destiny.”

Le’Andria Johnson, has taken the gospel music scene by storm since being crowned the season three winner of BET’s Sunday Best in 2010. Her debut CD, The Awakening of Le’Andria Johnson, entered at #1 on multiple music charts, including both the Billboard Top Gospel Albums and the Top Christian/Gospel Albums charts. The CD also debuted at #1 on the Christian Music Trade Association’s Current Gospel Overall chart. It spent eight weeks at #1 on Billboard’s Top Gospel Albums chart, and remained in the Top 5 for over 15 weeks.