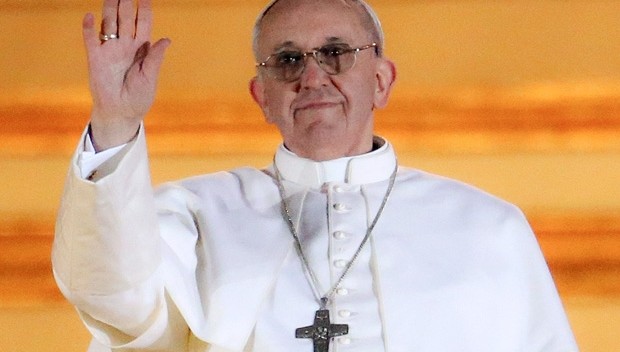 VATICAN CITY — According to AP, Argentine Jorge Bergoglio was elected pope Wednesday and chose the papal name Francis, becoming first pontiff from the Americas and the first from outside Europe in more than a millennium.

A stunned-looking Bergoglio shyly waved to the crowd of tens of thousands of people who gathered in St. Peter’s Square, marveling that the cardinals had had to look to “the end of the earth” to find a bishop of Rome.

He asked for prayers for himself, and for retired Pope Benedict XVI, whose stunning resignation paved the way for the tumultuous conclave that brought the first Jesuit to the papacy. The cardinal electors overcame deep divisions to select the 266th pontiff in a remarkably fast conclave.

Bergoglio had reportedly finished second in the 2005 conclave that produced Benedict — who last month became the first pope to resign in 600 years.

After announcing “Habemus Papum” — “We have a pope!” — a cardinal standing on the balcony of St. Peter’s Basilica on Wednesday revealed the identity of the new pontiff, using his Latin name.

The 76-year-old archbishop of Buenos Aires has spent nearly his entire career at home in Argentina, overseeing churches and shoe-leather priests.

Tens of thousands of people who braved cold rain to watch the smokestack atop the Sistine Chapel jumped in joy when white smoke poured out a few minutes past 7 p.m., many shouting “Habemus Papam!” or “We have a pope!” — as the bells of St. Peter’s Basilica and churches across Rome pealed.

Chants of “Long live the pope!” arose from the throngs of faithful, many with tears in their eyes. Crowds went wild as the Vatican and Italian military bands marched through the square and up the steps of the basilica, followed by Swiss Guards in silver helmets and full regalia.

They played the introduction to the Vatican and Italian anthems and the crowd, which numbered at least 50,000, joined in, waving flags from countries around the world.

“I can’t explain how happy I am right down,” said Ben Canete, a 32-year-old Filipino, jumping up and down in excitement.

Elected on the fifth ballot, Francis was chosen in one of the fastest conclaves in years, remarkable given there was no clear front-runner going into the vote and that the church had been in turmoil following the upheaval unleashed by Pope Benedict XVI’s surprise resignation.

Patrizia Rizzo ran down the main boulevard to the piazza with her two children as soon as she heard the news on the car radio. “I parked the car … and dashed to the square, she said. “It’s so exciting, as Romans we had to come.”