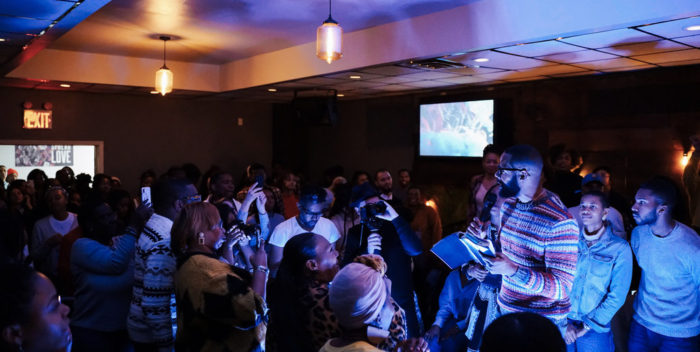 As I walked up a very steep stairwell with about 25 steps, I heard a crowd of people who seem to be engaging with one another. As I reached the top of the steps, I noticed a sea of twenty something year olds congregated in a common area outside of the sanctuary, a sanctuary that looked more like a chic Brooklyn lounge than a church. I’ve been to Epiphany Brooklyn on many occasion but the energy on this particular Sunday was different. This standing room only service was a bit unorthodox and as I walked in, I noticed that Pastor Brandon was already well into his sermon derived from Luke 7:41. The title of his sermon was entitled Paid in Full.

Being a Hip Hop head from The Bronx, as soon as I heard the sermon’s topic, I immediately begin to think of the 1987 Eric B and Rakim classic, Paid in Full and the legendary Rakim’s opening lyrics swarm my brain: Thinkin of a master plan, cause ain’t nuthin but sweat inside my hand, so I dig into my pocket, all my money is spent, so I dig deeper but still comin up with lint, so I start my mission, leave my residence, thinkin how could I get some dead presidents…

The God MC’s version of Paid in Full is clearly different from the God of our souls, as he tries to come up with a plan to get paid, Jesus has already paid the debt. “The beauty of the passage is Jesus wants to pay your debt. Can you go through your contacts and find somebody that wants to wipe out all of your debt? I doubt if you find anybody and if you don’t know Jesus Christ, today is the day to get to know him because he is the one who will wipe out all of your debt. Jesus doesn’t pay the bill and say, you get the taxes and I get the tip, Jesus paid it in full,” preached Brandon Watts, lead pastor of Epiphany Church in Brooklyn’s Bed-Stuy section. The word really resonated with me because oftentimes we forget that Jesus was born to take on this very debt that is spoken of.

Very quietly and unassuming, communion is being passed around and if you dosed off for even a second, you would have missed the offering. One would think that offering would be the most important part of the service but not here, the word and worship is.

As the sermon comes to an end though, something else begins to take place, as a plethora of singers begin singing together, yet apart, as they were sprinkled sporadically around the church as if it were a campfire. Songs like Jesus Paid It All, How Great is Our God, Agnes Dei, Way Maker and No Greater Love filled the atmosphere. Usually when the sermon ends, church is over but it was clear that church was just beginning, literally! This is what millennials and Gen Zers at Epiphany Brooklyn christened a Rewind Service.

Being in church my entire life, I had never experienced a church service in this format but it was strategic, according to Epiphany’s Lead Pastor, Brandon Watts.“You know man, one of our core values at the churches is cultural relevancy and so I think a lot of stuff that we do is birthed out of what we see and who we see that we’re engaging in the community. We’ve gotten a lot of people that come to our church straight off the street and one of the things I noticed about New York is that they always have events going on and there’s always something else fighting people’s attention. So we started to look around and say what could we do that could be attractive, particularly to people who are what we will call de-churched,” says Watts.

Nearly 50% of the United States population identify themselves a Christians, yet are not actively engaged in a particular church. Most of the aforementioned 50% were once apart of a church, but for many reasons are not anymore, thus the term “de-churched” was born. Pastor Brandon embraces the de-churched as a mission field opportunity to present Christ to a dying world, particularly young adults in their 20’s. 92% of the members at Epiphany are between the ages of 20 and 29, so it is not uncommon to hear congregants yell out street vernacular like “No Cap” or “Facts” any time during a sermon and Pastor Brandon wouldn’t have it any other way. Watts went on to say that,“Millennials and Generation Z are classified by many researchers as the hardest to reach and that’s exactly who we want to go after.”

As the service comes to a close (one of three), the band starts to play a familiar song that I’ve only heard in Rap/Song form from Kanye West’s platinum album The Life of Pablo, but these aggregation of singers brought new life to West’s, Father Stretch My Hands with a groove that would make even Yeezy’s Sunday Service Choir proud. The entire room was lit lit and people were rejoicing even as they were leaving the sanctuary. Judit from Hungary has been attending Epiphany for three years and she had this to say about Epiphany’s Rewind service, “I don’t think we worship God enough as a society and I love that we were able to freely worship God and welcome the Holy Spirit into our hearts. I love it here.”

With only five years under their belt, Epiphany Brooklyn is one of the fastest growing millennial churches in a borough with the most churches and that is no easy feat. Although they’re in dire need of a new edifice this year, the church’s lead pastor is already thinking five years from now. “I try to cast vision before our church and we have the next ten years already written out. We have a very clear plan. We want to be a church that makes a great impact in our city and neighborhood. Over the next five years, we plan on being way more involved in our community. There is a 44% abortion rate in our zip code of 11216, and we would like to see that number lowered and we believe the church can make great impact, so we have ministries set up where we can potentially implement a pregnancy crisis center. We want to make an impact on homelessness in our city as well. There are 55,000 homeless people in New York City and we are so numb to it that we walk right by it. As a church internally, we want to see people grow in their faith, have more marriages, we want to see more babies get dedicated to the Lord and we definitely want to be settled in a larger facility”.

Each and every day, churches across the globe are closing in record number due to low attendance and foreclosure but one thing is for certain, Epiphany Brooklyn is a church on a mission to win souls by any means necessary. And if you don’t know, now you know!