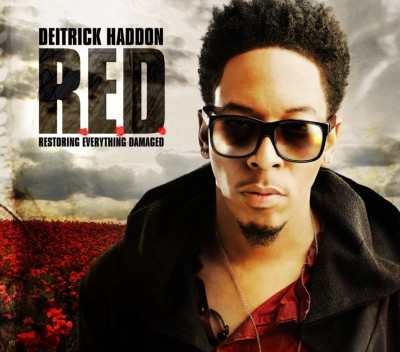 LOS ANGELES — September 3, 2013 – Gospel trailblazer Deitrick Haddon, who successfully intermingles contemporary styling of R&B and Christian sensibilities to produce his own unique brand of “Gospel Soul” music.   Haddon, twelfth studio album, “R.E.D.: Restoring Everything Damaged” in-store and available on-line TODAY– Tuesday, September 3, 2013 AND R.E.D. promotional tour in eight markets Kicks off September 3rd.
The R.E.D. metaphor and its message of redemption are consistent throughout the album that will be available in a standard 12-song set and an expanded “Deluxe Edition” featuring five bonus tracks.
“The title, R.E.D.: Restoring Everything Damaged, is more than just a creative acronym.  It represents an album that is, for me, very transparent,” offers Haddon.  “R.E.D. means the color of love…the color of life…the color that binds us all together.  It’s the color of the blood of Jesus, He that forgives us of our sins and restores everything damaged in our lives.”
The heart of R.E.D. is Haddon’s unfailing desire to offer his faithful fan base a window into his most intimate thoughts and feelings.  Haddon says, “I want people to know that I’m not making music to fit a format or make church people happy.  I am making music that reflects my experience on the planet Earth as a Christian.”  Haddon believes “there are moments when you are not always lifting your hands praising God. That’s not real!”
What makes Haddon’s music so appealing to today’s progressive Christian is his masterful ability to seamlessly channel secular music styles into a faith-based format.  Pop, rock, soul and funk music enhance the impact of his songs like the infectious “God @ Work,” the soulful praises of “Victory,” “Feel a Breakthrough,” and the straight up Al Green-influenced “A Little Prayer.”  A huge fan of anything out of the `60s and`70s Soul Movement, Haddon counts legendary hit-makers like Brother Donny Hathaway, Sam Cook and Stevie Wonder as musical influences.
Assisting on R.E.D. is frequent collaborator Blaze, who teamed with Haddon on 2012’s Dove-Award winning Gospel Record of the Year “Church on the Moon.”  Younger brother David A. Haddon and newcomer Tubb Young,
who produced the albums lead single (“Have Your Way”), and helped Haddon create music which is “authentic, futuristic and makes innovative use of real soul sounds.”
In 2010, Haddon expanded his ministry to film.  He produced and starred in “Blessed and Cursed” and he continued on that path to create “A Beautiful Soul” with a limited theatrical release through a partnership with AMC, and now available on DVD, the film made its broadcast television debut on TV One in 2012.  Next up Haddon will begin production on the sequel to his independent film “Blessed & Cursed,” a powerful story that resonated deeply with young audiences. He will follow his big screen exploits by co-starring in the faith-based docu-series “Pastors of LA,” which chronicles the lives of six Los Angeles based ministries and is set to premiere on the Oxygen network in Fall 2013.  Haddon also recently inked a deal to launch his own label imprint, Red Jungle Records. Distributed by Tyscot Records, the label deal allows Haddon to write and produce for other acts.
“I know other artists have released records called Red but I’ve had this idea for a while,” Haddon explains. “I contemplated changing the title but at the end of the day I wanted to stay true to my creativity and message. R.E.D. means so much to the entire team and we’re even going into communities on a R.E.D. campaign.”
To hear Deitrick Haddon’s new CD, “Have Your Way” please visit: http://www.deitrickhaddonred.com