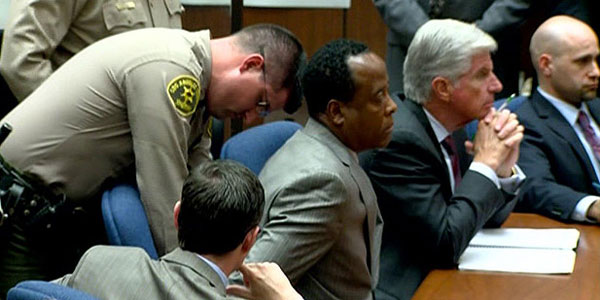 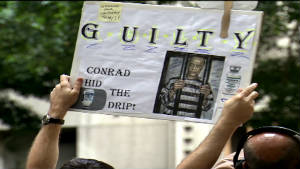 Los Angeles (CNN) — When Michael Jackson died unexpectedly two years ago, his fans worldwide erupted in a torrent of grief, anguish and — in tribute to the pop icon — song and dance.

On Monday, there were hugs, tears and shrieks of joy among his fans packed outside a Southern California courtroom after a jury found Jackson’s physician, Conrad Murray, guilty of involuntary manslaughter in the singer’s death.

“Oh my God, guilty!” one woman yelled out, seconds after the verdict was announced.

Others appeared to almost break out in song; some seemed to start dancing; and a chant soon rose up of “Justice, justice, justice.”

The honking horns and revelry were in contrast to the quiet scene inside Los Angeles Superior Court, where Judge Michael Pastor had earlier urged people to constrain their emotions.

But there were no such restrictions outside.

Hundreds had packed the streets and sidewalks earlier in the day anticipating a verdict. Many held signs calling for Murray’s conviction, like one saying, “Murray, burn in hell.” A long banner held out by several people had a simpler, more sentimental message: “We miss Michael.”

They were joined by throngs of photographers and videographers. Many flanked a walkway to the courtroom, their flashbulbs popping as Jackson family members, lawyers and others hurriedly walked into the courthouse to learn Murray’s fate.

The Los Angeles County Coroner’s office reported in June 2009 that the entertainer had died after suffering cardiac arrest. Jackson’s death on June 25, 2009, was caused by “acute propofol intoxication” in combination with two sedatives, the coroner ruled.

But Murray was eventually indicted, as prosecutors claimed he was criminally negligent in giving Jackson excess amounts of the surgical anesthetic propofol to treat the singer’s insomnia.

When the jury decided in the prosecution’s favor, the emotions spilled over on the streets as people yelled out, burst into tears and smiled.

“I’m so happy,” one woman, who had traveled to California from Memphis, Tennessee, told HLN’s Jane Velez-Mitchell outside the courthouse. “Michael deserves justice.”

One of the late singer’s sisters, LaToya Jackson, thanked all those involved in Murray’s conviction, which she called a “victory.”

“Everybody was wonderful,” she said as she left the courthouse.

Her brother Randy Jackson said “justice was served,” while opining that Murray should have to serve more than even the four-year maximum that he could get.

“Michael is with us,” Randy Jackson said.

And Kathy Hilton, a friend of the Jackson family and mother of Paris Hilton, said while leaving the courthouse that the verdict was bittersweet, though still satisfying.

“At least they’ll feel some kind of relief, some kind of closure,” she told HLN, referring to Jackson’s parents, Joe and Katherine.

The reaction was equally swift and emotional online and outside Los Angeles.

Melissa Fazli, a CNN iReporter and student at California State University, Fullerton, said she broke into tears on hearing the news.

“It’s really sad to know that Conrad Murray, because of his negligence, took Michael Jackson away,” Fazli said, expressing hope that it might dissuade “doctor-shopping” that might lead people to get more drugs than they can safely have. “That’s why I cried.”

“Next time don’t be so greedy Conrad Murray! Guilty!” wrote one such commenter on Twitter, former MTV VJ and hip-hop personality Ed Lover.

Hip-hop artist Nicki Minaj offered a restrained reaction on her Twitter feed, saying, “People are cheering, but there really are no winners here. This has been an utter tragedy from beginning to end.”

John Branca and John McClain, the co-executors of Jackson’s estate, released a statement on Michaeljackson.com in which they lauded the verdict and remembered the singer as “the greatest entertainer that has ever lived.”

“The estate of Michael Jackson and Michael himself has always believed the jury system works and despite the tragedy that brought about this trial we are in agreement with the jury’s verdict,” they wrote. ” In this case, justice has been served.”

Click here for our tribute to Michael Jackson: http://issuu.com/rootmagazineonline/docs/issue_2/1