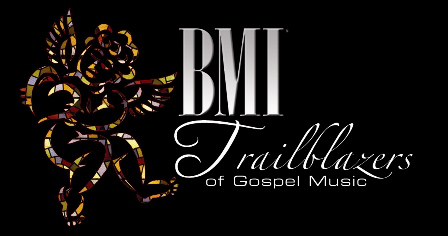 Star-studded ceremony slated for January 17 in Atlanta
NEW YORK, October 16, 2014 – Broadcast Music, Inc.® (BMI®), a global leader in music rights management, is set to salute gospel leaders Israel Houghton, LaShun Pace and The Anointed Pace Sisters at its 16th annual Trailblazers of Gospel Music Awards in Atlanta.
The event, which was previously held in Nashville, is slated for Saturday, January 17, 2015 at the Rialto Center for the Arts (80 Forsyth Street NW, Atlanta, Ga.). Gospel music’s premier songwriters, brightest stars and leading industry executives will attend the invitation-only event, which is part industry celebration and part awe-inspiring worship service. BMI will also announce the Most Performed Gospel Song of the Year at the ceremony. To request press credentials for the red carpet, please visit http://bit.ly/Zolt9e.
“I’m thrilled to bring the fete to Atlanta this year, and to honor these revered luminaries of gospel music,” said BMI Vice President, Writer-Publisher Relations, Atlanta, Catherine Brewton. “Atlanta has a rich musical history and it’s the perfect setting to laud Israel Houghton, LaShun Pace and The Anointed Pace Sisters.”

“As Mayor of the City of Atlanta, it is my pleasure to extend a warm welcome to BMI and the attendees of the 2015 Trailblazers of Gospel Music Awards,” said Mayor of the City of Atlanta, Kasim Reed.
Israel Houghton is a prolific worship leader, musician, songwriter, producer and recording artist. His music ministry has spanned 22 years and includes work on more than 50 albums as an artist or producer, 19 awards and countless accolades. In 1995, he formed New Breed Ministries that gave way to his debut releases in 1997, Whisper it Loud and Way of the World. Since then, Houghton has released 11 solo and group CDs and has consistently been a commercial success with Billboard chart toppers New Season, Power of One and his most recent release, Jesus at the Center. Houghton has won several awards including five GRAMMY awards, 13 Dove awards, two Stellar awards and a Soul Train award.
The Anointed Pace Sisters’ storied career ranges from singing as children in local talent competitions in their native Georgia, to wowing audiences with their mellifluous harmonies on national television networks such as BET. Their debut release, U Know, climbed to No. 2 on the Billboard Gospel Album chart and spawned the hit singles “When God is in the Building,” “Safety Zone.,” and “Be a Fence.” Their success laid the groundwork for group member and sister LaShun Pace to launch a successful solo career. LaShun’s first album, He Lives, featured her opus “I Know I’ve Been Changed.”  Accolades and memorable albums followed including Shekinah Glory, to being inducted into the Christian Music Hall of Fame, multiple Stellar awards, and a Soul Train Lady of Soul award. Collectively, LaShun Pace and The Anointed Pace Sisters have a discography and legacy worthy of celebration.
BMI’s impressive roster of gospel songwriters includes Kirk Franklin, Fred Hammond, Donnie McClurkin, Yolanda Adams, Jessica Reedy, Marvin Sapp, Twinkie Clark, BeBe Winans, Israel Houghton, Kim Burrell and many others. To learn more about our gospel music leaders, visithttp://www.bmi.com/genres/gospel
Follow BMI on Twitter (#BMITrailblazers) and Facebook.
Broadcast Music, Inc. ® (BMI®) is a global leader in music rights management, serving as an advocate for the value of music.  BMI represents the public performance rights in more than 8.5 million musical works created and owned by more than 650,000 songwriters, composers, and music publishers. The Company negotiates music license agreements and distributes the fees it generates as royalties to its affiliated writers and publishers when their songs are performed in public. In 1939, BMI created a groundbreaking open-door policy becoming the only performing rights organization to welcome and represent the creators of blues, jazz, country, and American roots music. Today, the musical compositions in BMI’s repertoire, from chart toppers to perennial favorites, span all genres of music and are consistently among the most-performed hits of the year. For additional information and the latest BMI news, visit www.bmi.com, follow us on Twitter @BMI or stay connected through Broadcast Music, Inc.’s Facebook page.