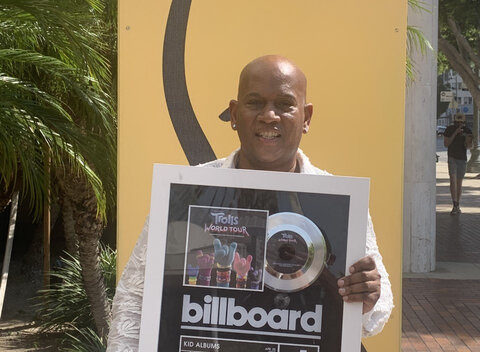 (Hollywood, CA)  Featured in the new DreamWorks blockbuster movie “Trolls World Tour” (starring Justin Timberlake, Anna Kendrick & Mary J. Blige), features on rap superstar Childish Gambino’scritically acclaimed CD “3.15.20”, and a new song collaboration “Time” with pop star Ariana Grande, 2020 has been quite the year for gospel star Brent Jones!  At a ceremony this weekend, Brent was also awarded a Billboard #1 plaque for his contributions to the Trolls World Tour movie soundtrack as well as membership into the Screen Actors Guild!

“What a crazy year! How is it possible in the midst of a global pandemic, I’ve been working like a madman? Because God is faithful!
In addition to my forthcoming album (shout out to the one & only Teddy Riley), God has also allowed me to expand my talents into the world of movies, television and stage plays in 2020 – and for that and more, I am truly thankful and humbled!” says Brent Jones

Singer/songwriter extraordinaire, who’s pioneering work with his urban group Brent Jones & T.P. Mobb set the stage for Kirk Franklin and urban contemporary gospel, JDI artist Brent Jones’ upcoming new CD “Nothing Else Matters” is the highly anticipated follow-up to “Open Your Mouth and Say Something”, which topped the Billboard charts for over 54+ weeks, earning widespread critical acclaim and multiple award nominations including the 2019 Dove Award and 2019 Stellar Award.