The Grammys® returned to the big apple of a 15 year hiatus and BMI was right in the mix of the dozens of events that took place in New York City.

On Saturday, January 27th, Broadcast Music, Inc. ® (BMI®)presented its annual pre-GRAMMY event How I Wrote That Song® (HIWTS), in partnership with the Apollo Theater, at the legendary performance hall.

More than 500 attendees got an up close and personal lesson from music’s biggest songwriters, some obscure, some known. Songwriter and producer, RedOne, is responsible for one of Lady Gaga’s biggest hits, “Poker Face” as well as Enrique Iglesias hit “I Like It.” The Moroccan born songwriter and producer began writing songs at the tender age of 16 and hasn’t stopped since. He credits Stevie Wonder, Marvin Gaye and Bob Dylan as some of his influences. “All of my brothers and sisters sang while we were growing up but they sang cover songs, I was the one wanted to do my own thing and write my own songs and I realized at 116 years old that songwriting is what I really wanted to do”.

Growing up less that ten miles from New York City in Newark, NJ, Faith Evans was the only female on the panel and was indeed the star of the show, as all of her male counterparts expressed their interest in working with her. During the discussion, Faith spoke in depth about the process of creating her late husband’s, the Notorious B.I.G., tribute “I’ll Be Missing You” and how it made her a household name with people unfamiliar with her catalogue. However, for the millions of people are familiar with her catalogue, Evans is the architect of songs like “Love Like This,” “Soon As I Get Home,” and “You Gets No Love,” just to name a few. Although those songs garnered the singer/songwriter millions in publishing dollars, her first actual placement came a few years prior on Usher’s self-titled debut album. “When I first met Puff he was working on Usher’s first album and I was at the session and he found out I could sing and I went in the booth and started arranging the sing and putting in more lines and when I came out of the booth, he asked me if I wanted to sign to his label.” 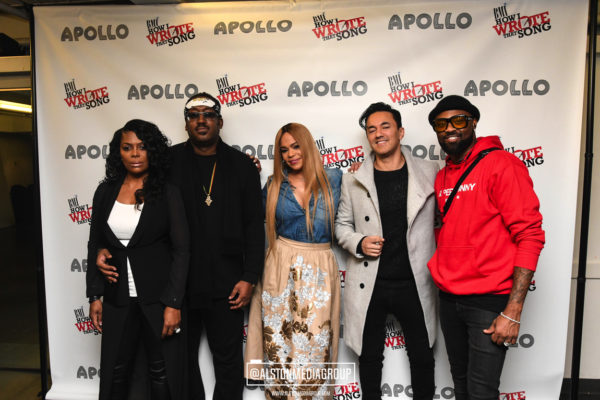 Mark Batson is a name that many people may not be familiar with, however, once you see his pedigree, you realize that he is a name that you should know and that he has probably written a song that you know and love. Batson, a Brooklyn native, has written and produced songs for India.Arie, LeAnn Rimes, Anthony Hamilton, Alicia Keys,  Jay Z and others. Hamilton’s breakout single “Charlene” was actually written about Batson’s ex-girlfriend. When asked when did he realize that he wanted to do music as a career, Batson states “I grew up playing in church and then I was in a rap group in the projects because I grew up in a time where Hip-Hop was just being born and I saw The Cold Crush Brothers and Romantic Fantastic 5 and eventually I got a scholarship to Howard University to play in a jazz band and by the time I got to college, I was sure that music is what I wanted to do with my life.”

Relative newcomer Tory Lanez stressed the importance of quality over quantity in an artists’ work and setting the bar high for his art. His hit songs “Say It” and “Luv” borrows from 90’s Hip Hop and R&B, and bridges the gap between former and new culture.

Before closing out the panel, Brewton called surprise guest GRAMMY® award-winning songwriter/producer Rodney Jerkins to the stage, who was in the audience sitting among with industry tastemakers, students and aspiring songwriters. The renowned hitmaker, also known as DarkChild and whose signature sound shaped the careers of Brandy, Destiny’s Child, Michael Jackson and more, provided invaluable advice and encouraged the crowd to never give up on their craft.