Catherine Brewton is a Power Player in every sense of the word as it pertains to her business acumen. At BMI, Brewton is one of the only African American women in a high level position, but it is her work off the field that sets her apart from the rest. One of her greatest missions in life is to help other people and she is doing just that, as she continues this great work that her mother started many years ago.

Root: What is the back story on Community Outreach Christian Ministries?

Catherine Brewton: The ministry did not exist 30 plus years ago and there are currently two facilities now. We have the center that functions as a church and the other facility is the “Harvest Center,” that has two houses that serve as drug houses. My grandparents lived in that neighborhood but my family moved away after my father was murdered in that very same neighborhood. They said that they would never go back, but my mother was lead back to restore a community she believed was lost.

In the 1980’s when crack came into play, she saw the devastation that had taken on the community and wanted to see a change, so she went back and made a plea to restore the community. It started with the community center (that still exists today), that she bought and turned into a church. She even purchased all of the torn down houses and built a multi-purpose facility that functions as a food pantry that feeds the homeless and provides after school snacks for children throughout the school year. Additionally, we try to open up the basketball court along with other recreational activities for the community. The community centers that used to be in urban neighborhood literally don’t exist anymore, so kids play in the streets. Thanksgiving is our big initiative as a fundraiser, but we feed people two days a week on Tuesdays and     Wednesdays, Breakfast is at 6AM and lunch at 12 Noon.

Root: How has this initiative impacted the community?

Catherine Brewton: It’s been such a blessing. When my Mom passed away in 2007, I was so overwhelmed. I have a full life and I’ve always been a financial supporter of the ministry but when she passed away, I became overwhelmed. Before she passed, all I had to do was write a check, bring talent to the facilities and have limited involvement. After she passed away, not only was I trying to grieve but I also had people who were depending on me to continue the work.

In hindsight I thank God so much. My mother was adamant about not being encumbered in debt and at the time of her death all of the facilities were paid for. I know for a fact that God placed favor over her life because of her heart for the people that she served. One of the facilities that she built is worth $2 million and that is based on donations, prayer and favor. In 2007 the stock market crashed and everything from small businesses to churches were closing, but we never missed a beat. We buried my mother on a Saturday and by Tuesday we were feeding people. As career stricken as they were, the work still continued. My mission is to help everyone understand that my mother has done her part and we have to continue the work and the week leading up to Thanksgiving and Thanksgiving Day is really about that.

After my mother’s death, this all started out as a celebration of her life and then it became what I call “Hope For Harvest.” This event has really given people in that community hope and it let’s them know that although the visionary is no longer with us, the vision is not dead. 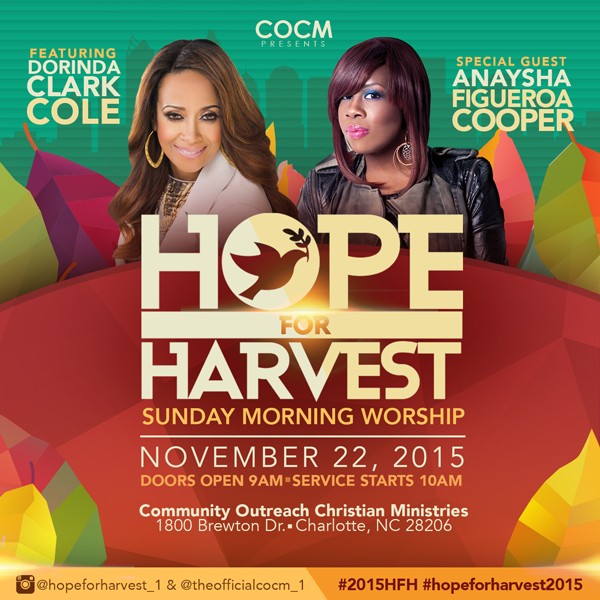 Community Outreach Christian Ministries (COCM) is a nonprofit organization committed to furthering the vision of the late Pastor Barbara Brewton-Cameron of helping those individuals and families less fortunate in Charlotte, North Carolina and surrounding areas. Our Mission is to meet the spiritual and physical needs of the homeless and to restore them to full and productive lives. This mission is fulfilled every hour of everyday by the many services we provide which include, serving hot meals five times a week, distributing groceries through our food pantry, education resources, housing support and an after school program for children in the community amongst many others. Through our continued efforts we have seen many lives changed for the better. We will continue to aid in servicing the needs of the poor in this community. The goal of COCM and The Harvest Center is to continue to make a difference not only in our immediate community, but throughout Charlotte and beyond.

For more information or to donate to “Hope For Harvest” go to http://cocmcharlotte.org