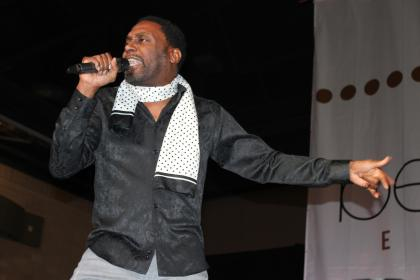 The Be Beautiful Expo was exactly what the name displays, simply beautiful! Formerly known as the Inspiration and Music Conference, Radio One decided to include all of it’s stations in the mix, as Praise 103.9, Old School 100.3 and the new BOOM 107.9, were all LIVE on air from the Philadelphia Convention Center. Hundreds of vendors adorned the convention center, selling everything from cultural art, t-shirts, skin care products and so much more. There was literally something for the entire family that included which The Kid’s Zone, Keystone Health and Wellness pavilion, Fashion and Women’s pavilions, Celebrity Selfie and Autograph Booths, Auto Zone and ManCAVE. The Google Hangout Suite, hosted by Charlie Mack TV gave fans a chance to come face-to-face with some of their favorite celebrities using the latest technology from Google.

On the musical front, Radio One had you covered, as the gospel stage was on fire all day with a plethora of indie and major artists all day long. Pastor Marlon Lock, Nancey Jackson- Johnson and Brandon Camphor represented for the indies, while Jason Nelson, Crystal Aikin, Anita Wilson, Dorinda Clark- Cole, Vashawn Mitchell, Brian Courtney Wilson, Casey J and 17 year- old Jekalyn Carr- who literally turned the Philadelphia Convention Center into a mini church service.

The finale concert was most anticipated (especially for my age range of 35 and up) and included old school acts MC Lyte, the first ladies of Bad Boy- Total and iconic Hip Hop artist, Big Daddy Kane! With hits like “Cha Cha Cha,” “Can’t You See,” and “Warm It Up Kane,” all three acts took us back to a time in place where music was fun and non- misogynistic and the crowd loved every minute of it. The city of brotherly love got a pleasant surprise when their “Hometown Hero,” Allen Iverson walked through the crowd and hit the stage with Lady B to show love to his fans.

The Be Beautiful Expo was a wonderful experience from start to finish so if you missed it this year, you want to make it your business to make it next year!

Check out Photos from the Be Beautiful Expo HERE: