Well, the time has come again for us to get out there are exercise our right to VOTE! I literally just came back from placing my VOTE after standing in line for about 45 minutes but it was all worth it. Forget the fact that President Obama is the best man to lead this nation, but take into consideration that 45 years ago African American people in this country were beaten, kicked and spit at for exercising their right, Imagine that? Although racism still exists and probably always will, we have come a long way!

President Obama is the man for the job again and that same enthusiasm we had in 2008 must continue even beyond 2012. Governor Mitt  Romney has been very clear about who he is looking out for and it is not everyday people like you and I. Throughout his entire campaign he tried to tear our president down as if he didn’t make any accomplishments over the last four years when he has. Time and time again he has been talking about his “Five Point Plan” and creating 12 million jobs but not once did he state how he was going to do it. We all know about his infamous 47% statement but even as recent as yesterday he continues to disrespect Obama supporters with his antics. Check out the tweet below: 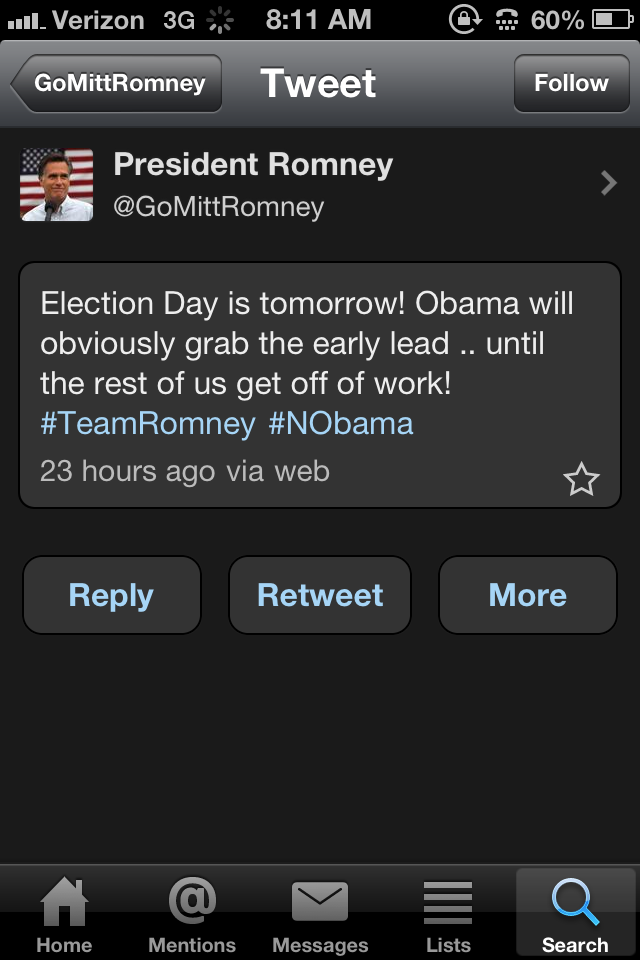 This type of disrespect is typical of Romney and his camp but if we all stand together and VOTE the right way, we won’t have to stand for his rhetoric, flip-flopping and bad political practices. Mitt Romney is showing us who he is but we must listen and ACT! From the very beginning President Obama has been upfront and honest with the American people about his plan. Even during his victory speech in 2008, he stated, “There will be setbacks and false starts. There are many who won’t agree with every decision or policy I make as president. And we know the government can’t solve every problem. But I will always be honest with you about the challenges we face. I will listen to you, especially when we disagree. And, above all, I will ask you to join in the work of remaking this nation, the only way it’s been done in America for 221 years — block by block, brick by brick, calloused hand by calloused hand.”

The energy is high and not even Hurricane Sandy ca’t stop the VOTE! I spoke to many first time VOTERS and they are excited about VOTING in this election. Later on today I am going to pick up an 18 year old young man who does not really care for politics but believes that President Obama is different from other politicians. So today, let’s make history again and VOTE for President Barack Obama….Again! 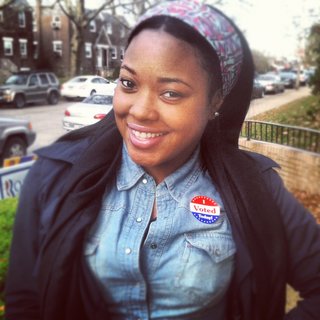 First Time Voter Amber Ames, 19, was excited to exercise her right to VOTE!